On February 16th me and Wilson.

We would celebrate birthday after birthday, single handedly keeping our local bakery up and running. The kids would run around, playing tag and musical chairs until Nana, one of my youngest cousins, cried because she didn’t sit on a chair when the music went off. We would laugh and then my tia Joyce would make the kids re-do the round so Nana could get one more chance. My other cousins would claim trampa, cheating, and they would be off to play hide and seek instead.

Away from the chaos of the small army of kids, my tia Ana would be in the kitchen making enough arroz con pollo to feed the entire town of La Troncal, the town half of my family left behind when they came to New York.

A six hour plane ride, a one hour car ride, and a broken U.S Immigration system keeps us from eating birthday cake every week. Instead, we settle with seeing photos of each other’s birthday dinners on Facebook. My dad and I try to laugh it off by saying, “comiendo tanto pastel subiriamos 10 libras.”

Behind our laughter we mourn all the special occasions we miss, the birthdays, graduations, holidays. We ache for the ability to have dinner together, just because. We grieve all the laughter and all the tears we’ll never see. We crave the birthday cake and not feeling like a part of us is constantly missing.

On my dad’s side I have two uncles and four aunts. My dad, uncles and my oldest aunt live in New York but my other three aunts still live in Ecuador. When my dad became a citizen he petitioned to bring my youngest aunt, tia Doris, to the United States. Much to their dismay the wait time was 10 years. Upon learning about the long wait time my other two aunts decided not to apply, ten years was too long and at the time they were doing alright in Ecuador.

It has now been ten years since my dad petitioned for my tia Doris. In those ten years she had two children, Jean Carlos who is 9 and Sonia who is 5. She is not looking forward to leaving behind the place where she set roots with her kids but after the COVID-19 pandemic she has no choice.

The pandemic highlighted the economic problems that have existed in Ecuador for a long time. Ten years ago one of my aunts who didn’t want my dad to petition on her behalf stated that Ecuador was her home and she had a stable source of income she knew would keep her afloat. She couldn’t have guessed that a pandemic would destroy her business in those ten years but the realization that her home might no longer be able to safely house her is devastating.

Entire family units are leaving Ecuador and coming to the United States. In our neighborhood, my family knows three families that successfully crossed the border and are now in New York or New Jersey. The more people leave the neighborhood, the less customers my aunts have and the more they contemplate coming to New York themselves. Coming to the United States was made easier when Mexico opened its borders to Ecuadorian tourists. From there my aunts heard that people paid 7,000 dollars to get to the border. The idea was intriguing but before they could really contemplate it, the border had become vigilant again.

With a flight to Mexico and 7,000 dollars there could have been a possibility for my family to finally indulge in all the birthday cake our hearts desired. But this was not the family reunification that I dreamed of. I want us all to be happy and where we feel most at home.

New York is not my family’s home, it is the place they escaped to in order to avoid hunger. New York is where they survive and Ecuador is what their heart aches for. The long wait times and the little possibility to seek asylum will keep my family apart for the foreseeable future. I just wish that they would let us eat birthday cake.

I cry every time I am in an airport. Something about the cold metal chairs, the outlets in inconvenient locations, and the overpriced food is really tear inducing. Now, I’m the kind of person who cries easily. I even cry while watching TikToks about dogs, but the tears I shed in airports are different. They are the type of tears someone only cries between homes.

There is something about the in-between stage of an airport that allows me to be vulnerable. I am not where I am going or where I am coming from so I can come up for air and breathe, just for a second. Between TSA checks and airplanes I feel tucked away in nothingness.

While I wait for my plane to board I am comforted by the idea of being in no-man’s land. Not in Ecuador, where my parents were born, and not in New York, where I was born. During that small window of time I belong to no one, not to Ecuador, not to New York, not to my parents, not to anyone. I spend so much time trying to belong that it’s nice to not need to belong to anyone except myself.

I’ve traveled to and from Ecuador since I was 5 years old. The first time I traveled there I flew with my uncle who was the first in our family to receive his green card. It was the first time I cried in an airport, wearing a poofy pink dress and a tiara. At the time my parents could not travel but they wanted so desperately for me to have a piece of their home, “le das dos abrazos a la abuelita, uno por mi y otro por ti” my mother would say as she embraced me one last time before I took off. It was the first of many bitter-sweet moments I would have in an airport.

I was so lucky I could travel back and forth, bridging the distance between my parents and their families but I was so unlucky to have to do that. Armed with my silly little blue book I could fend off TSA the way my parents could only dream of. Though my parents immigration status has never been a secret, at five years old I didn’t understand what not having “papeles” had to do with traveling to visit family.

As I cried in my big poofy dress and tiara, because my mother has always thought that airports are fashion shows, I recalled the story my mom would frequently recount of the last time she saw her mother. My mom came to the United States with a VISA, accompanying an elder woman who hired my mom to aid her in her travels. The last memory my mom had of her mother was that of watching her fade away as my mom disappeared into an airport. Out of sight of her mother my mom cried in the nothingness, not where she was going and not where she was coming from. My mom wouldn’t see her mother again for 14 years.

That’s the worst part of airports for me, not knowing when I will be back or what I will find, or won’t find, once I return. Everytime I’m not in Ecuador, surrounded by my grandparents, aunts and cousins I feel like a part of me is missing. Yet everytime I’m in Ecuador I feel like I don’t really belong, not completely, not the way I feel I’m supposed to belong. The push and pull about which place feels more like home stops when I’m in an airport waiting for my flight to board. At that moment all I can do is cry because I have two homes but I can’t exist in both at once. A perpetual foreigner to both places I call home. Maybe the one place that perfectly encapsulates my existence between Ecuador and New York is the airport in which I leave one for the other. 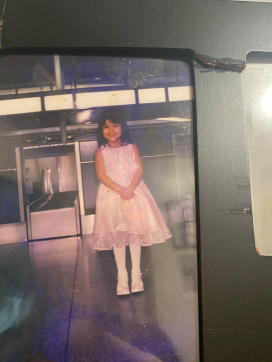 Pictured: Me in my poofy pink dress at John F. Kennedy Airport. Not pictured: my tiara, my silly little blue book, and the many tears that came after this picture was taken.