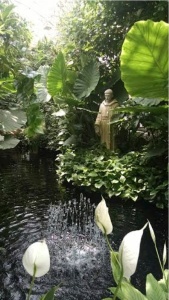 Little One looks at the blade of grass with awe.

Darting through a forest of green stalks.

Iridescent scales dance in the light

With every fine flutter of her wings.

The agile acrobat dips and dives with ease.

In hopes of capturing its beauty.

Digits envelop the creature in darkness.

Little One holds the blue-green wonder to her ear

To hear her secrets.

Darkness fell upon both worlds

And nothing stirred in the deep

Save a distant pulse.

Disturbed the void with an unmatched purpose.

From every ripple sprouted

And Beauty was there.

Calls sound from every direction,

Begging to be answered.

Groans and grumbles shook the foundation.

Barks and shrieks upset the place.

And the allure of every crescendo beckoned for one more

To bask in its glory

And add to the chaotic order.

The epitome of the whispers

Culminated in the birth of

One to behold the mystery.

The foundations rumbled with anticipation,

As the final beginning was conceived.

And a tremendous cyclone

Whirled a wonder into form.

And the One marveled and wrestled

Overwhelmed by its extent.

The One grew and changed in fascinating

Altering itself and the beauty around it.

And there was Pain and Happiness.

An immense struggle strangled the Beholder

With no particular cause to speak of,

Desires and Distractions permeated from its pores,

And Fear made its foundations

Confining One to the vestibule.

And the One was consumed

By what it had made.

And it could no longer hear the harmony

Which danced along the light beams

And illuminated the spectacle

That was stirred into being

From the Whispers of the deep.

Darkness fell and eyes were opened.

And Little One looks down

Upon the winged whispers with awe.